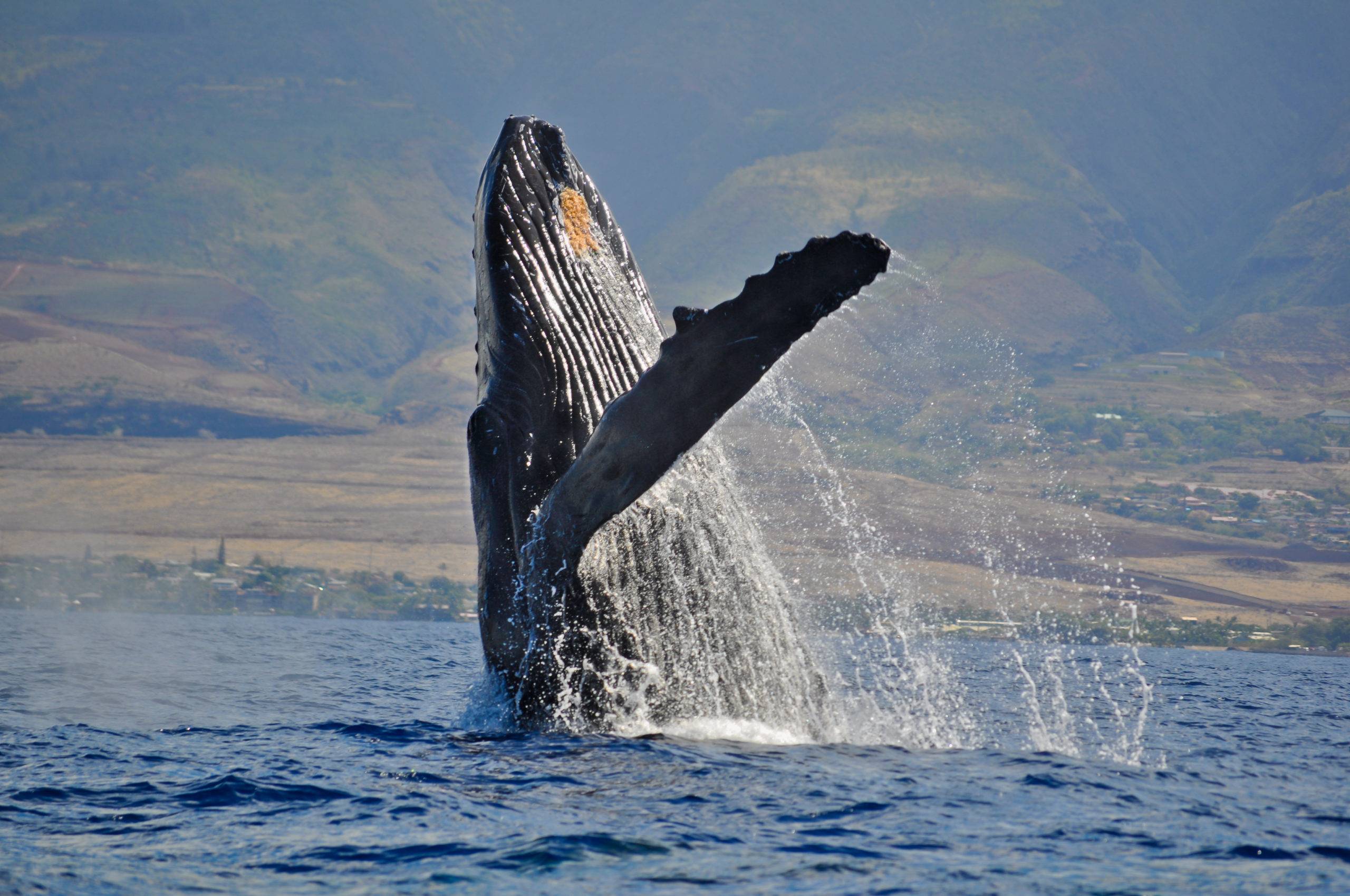 In Hawaii, we are lucky to have a wide range of whales in our waters every year. Drawn here by the warmth of our shores, these majestic creatures are incredible. Whether they are breaching or simply swimming around the islands, spotting one of these mammals will be a sight that you never forget.

At Aloha Outdoors, we have a wide selection of water sports, activities and adventures that you can enjoy in which you could get the chance to see one of the breeds of whales. From a Whale Watch Tour to a SUP rental, snorkel rental and a boat rental, you will be able to discover the Maui Whales.

When is The Whale Watching Season?

Here on the island of Maui, the whale watching season is between December 15th and April 15th. Throughout this exciting season, there are over 10,000 Humpback whales in our waters that have traveled down from Alaska and Canada.

With the world’s most densely populated school of whales traveling to our shores every year, the chance of seeing one of these whales drastically increases. It’s interesting to know that although the season is December to April, Humpbacks could be spotted as early as September until the beginning of June.

Even though Humpbacks are the most prevalent breed of whales to venture to our shores, they aren’t the only type. A wonderful thing about Maui is that the other breeds actually live in our waters throughout the year – unlike the Humpbacks that are only here throughout the winter. Overall, it is said that there are at least 18 other species of Hawaii whales. Spotted throughout the coastline, the whales love the shallow waters.

Everyday in the Maui waters is different – which is why so many visit our island each year. With a chance to see not only the Humpbacks, but also the Melon Headed whales, Short Finned Pilot whales and other breeds, there are plenty of photo opportunities.

If you do capture a photo of one of the rarer breeds, it’s always a good idea to contact the Cascadia Research Collective who study these amazing mammals. They also hold one of  the world’s largest and most diverse databases that details information about both Hawaii whales and dolphins.

If you are planning a trip to our wonderful island, here is a list of some of the whales that you could see – starting with the most common – the Humpback whale.

Population in Hawaii: approximately 10,000 in Hawaii in the winter months.

Throughout the peak Humpback season, there’s a large chance that you will see at least one throughout your trip. Making a six-week trip down from Alaska to the Hawaiian islands to breed and give birth (as well as rest), they love the warm waters.

During the season you might also get a chance to see one of their calves – which will more than likely be up on the surface taking a breath. Unlike adults that can hold their breath for 30 minutes or more at a time, a baby Humpback whale needs to take in air every 5-10 minutes due to the size of their lungs.

Growing an inch every day, these baby whales will stay with their mothers for an entire year after they are born. Navigating the waters and learning how to feed, the shallow and warm waters of Hawaii are the perfect starting point.

It’s important to remember that if you are witnessing a calf or an adult Humpback, that it’s illegal to get within 100 yards of them. Not only is this for your safety, but it’s because Humpback whales are protected. However, there is no way of knowing when a Humpback is about to breach. So if you are out on your paddle board or boat, they might breach closer to you than you expected.

Even though it’s predicted by NOAA that there are approximately 3,000 Melon Headed whales in the shores of Hawaii, it’s extremely rare to see one of these unique looking mammals. Despite being a deep diving breed, the Melon Headed whales spend quite a bit of time on the surface.

But because of Maui’s shallow waters, the only time that you could really see one of these whales is during a large congregation – so consider yourself lucky if you see one or more of these whales!

Alongside the Pilot whales and Humpbacks, False Killer whales are frequently seen in the Maui waters. However, that’s not a guarantee that you will see one throughout your trip.

It’s predicted that although there are approximately 150 False Killer whales in the waters, they tend to spend their time traveling throughout the Hawaiian islands – rather than resting in one place. However, that’s not to say that you won’t spot one during one of our kayak tours!

An interesting thing to know about this breed is that they are extremely predatory and have a distinct love of yellowfin tuna. Hunting throughout the coastline (as well as further out), they have been spotted in Ka’anapali as well as between Lanai and Maui.

Orcas are one of the predators of the Humpback whale – and one of the main reasons as to why they migrate down to Hawaii every year.

Like other mythical creatures across the world, many have claimed to see Orcas in the Hawaiian waters. However, there has been no concrete evidence that they regularly reside on our shorelines.

However, they do exist in Hawaii – despite not being part of the resident population. With sightings both in Maui and the Big Island (as well as one that washed up on Lanai), it’s clear that although there isn’t an abundance of Orca, they are still present.

One notable event when a large pod was spotted was back in 2013. On the outskirts of the Big Island, scientists managed to track them. From then on, however, the Orca swam out to the west of the island. Since then, a large pod of Orca has not been spotted.

One of the world’s least common whale species, sightings of the Pygmy Killer whales are incredibly rare. However, here in Hawaii there is a large grouping of them – the largest internationally.

Living in the Hawaiian waters throughout the year, they rarely come close to the shore – therefore it is unfortunately quite unlikely that you will spot one for yourself. Having said that, isolated groups have been reported near the shoreline of southern Maui – so you never know, you might be able to see one during your travels!

Residing off of the Kona and Lanai coastlines, Dwarf Sperm whales are rarely sighted above the water as they are a deep diving species. However, when they have been spotted, they are usually lying almost motionless on the surface.

As they are mostly offshore, the chances of seeing one of these whales is highly unlikely when you are exploring the coastline.

The Short Finned Pilot whales are one of the most exciting species to see along the Hawaiian shores. With a unique look and a majestic way of swimming, they have been occasionally spotted on the shores of Maui – even though they spend most of their time in the deeper water.

It might be fascinating to learn that Short Finned Pilot whales are actually part of the dolphin family – the second largest members in fact. Seen in a group of up to 50, you might be lucky to see at least one during your vacation.

Despite Sperm whales being one of the world’s most well-known species, they are very rare in Hawaii. This is because they tend to prefer the deeper waters where they can catch fish more easily – which aren’t prevalent throughout Hawaii. However, over the years, case studies by Cascadia Research found 32 Sperm whales off of the Big Island.

The final Hawaiian whale on our list is the Blainville and Cuvier’s Beaked whales. Similar in appearance to the bottlenose dolphin, these whales are frequently seen throughout the waters both in Maui and offshore of the other Hawaiian islands. However, they are most commonly seen just off of the Big Island.

See The Whales of Hawaii Today

As whale season gets closer, there’s no better time than now to book a Maui adventure with Aloha Outdoors. With increased sightings of some of the rarest whales on this list, you could get the chance to see one of these fascinating species up close!